I don’t know if you have already tasted alternatives to fish or shellfish, but to be honest, I’d rather avoid eating again most of the products that I tried. Indeed, the taste and texture of seafood are so specific that it is extremely hard to recreate. However, in recent weeks, I was struck by the number of deals about alternatives to seafood and simply the growing hype around this subject.

This feeling was confirmed by reading the Good Food Institute’s last report on seafood alternatives which shows how fast investments are rising in this space: 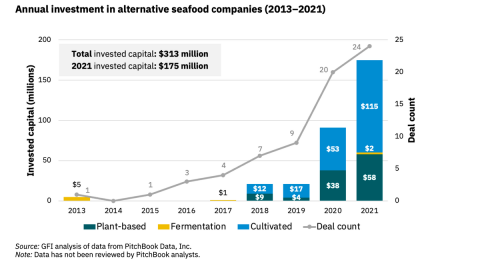 We can see that the number of investments has risen significantly in the past couple of years, with now more than $175M invested. And recent deals seem to confirm this trend in all the major categories of alternative proteins. Here are a few examples:

If these startups succeed in recreating something that tastes like the fish we used to eat, is there a real need? I have to admit that I was initially a bit skeptical about that. I thought that if overfishing is an issue, aquaculture was an acceptable answer. And beyond that, I also thought that eating fish was kind of an environmentally responsible choice for people looking for meat alternatives. 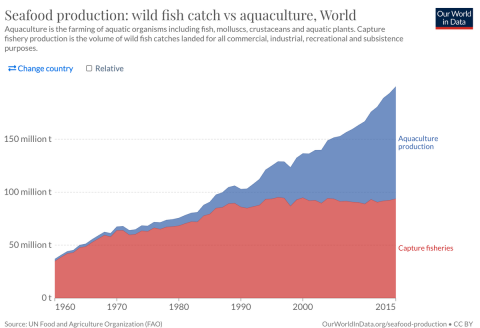 First, as we can see on this graph, the rise of seafood production globally is impressive but is mainly brought by aquaculture.

However, aquaculture is not as innocent as we often think it is. In the graph below, various seafood carbon footprints are compared, from wild fish (blue) and farmed fish (red) to chicken (green, at the bottom). It is impressive to see how most of the farmed seafood, which production increases wildly, has a much higher impact than chicken. 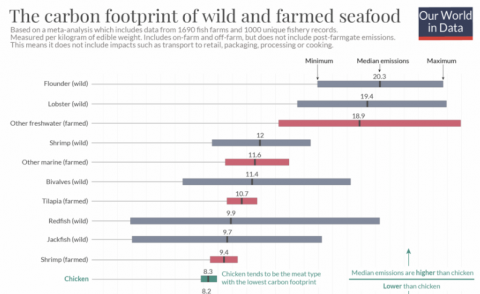 In a word, as fish consumption is rising (faster than the world’s population), the need for tasty and effectively sustainable seafood alternatives is a thing. Hence, the rise in investments in startups working in that space. Beyond the need, the economics are also quite compelling. Aquaculture and fishing are great consumers of energy. As its costs go up, the possibility for alternatives to reach price parity (when the alternative is priced the same as the “real thing” to the consumer) increases.

The possibility of seafood alternatives opens a lot of questions for the future. If they “work” (i.e. if they are clean label, tasty, affordable, and sustainable):

We are still far from having definitive answers to these questions. However, planning for them now is something that both the industry and governments should start now.