10 NOTABLE DEALS IN THE PAST COUPLE OF WEEKS

🦄 🇩🇪 A new unicorn for Europe’s FoodTech! Choco just raised a huge $100M for its B2B marketplace that connects restaurants and their suppliers through an app. This deal and others in this space (such as Deliverect which also became a unicorn this year) show how big the potential for disruption and digitization are in the foodservice industry. It is also a pleasure to see that this wave of innovation is led by European startups!

🧺 🇮🇳 BigBasket, India’s giant online grocery retailer raised $131M. The startup, which is largely owned by Tata will use this money to reinforce its dominance (37% of the Indian e-grocery market!)

🏋️ 🇺🇸 Mikuna, a US-based startup, raised $5.6M for its protein powder made of chocho. If you have never heard of chocho, that’s quite normal. It’s an ancient type of lupin that grows in the Andes.

🏭🇨🇭 Planetary, a Swiss-based startup, raised $8M to support the growing ecosystem of companies using fermentation to build alternative proteins. It is part of a small but growing group of companies that are building a “cloud-like” infrastructure of bioreactors. This will enable companies working on biomass and precision fermentation to scale their production fast. Planetary hopes to become a global player with multiple facilities by 2030.

🐔 🇺🇸 Nowadays raised $7M for its plant-based nuggets. Their products have a shorter list of ingredients and show the appetite for taster and cleaner plant-based alternatives. 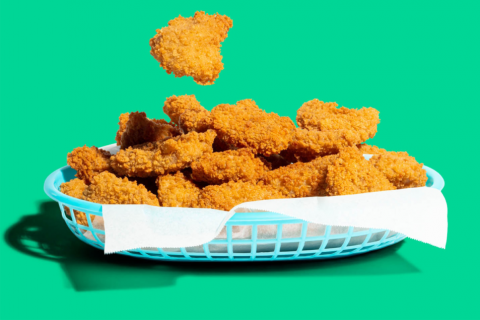 🥩 🇺🇸 Upside Foods raised $400M and becomes the first cellular agriculture unicorn! It maintains its target of putting products on the market (hence to obtain regulatory approval) by the end of the year while developing a “commercial-scale” facility.

🍽️ 🇮🇪 Fresco, a Dublin-based startup, raised $20M to keep developing its software that connects recipes to multiple food appliances and hence creates the interconnectivity that this space is still severely lacking.

🚴‍♂️ 🇸🇪 Kavall, a Swedish quick-commerce startup, just raised $15M. While we mostly hear about concentration and competition between unicorns in this space, it seems that the hype is still not dead and that smaller players still have a shot at raising money and growing around niche markets and uncovered geographies.

🥃 🇺🇸 Air Company, a US-based startup, raised $30M for its very cool concept of converting captured CO2 into vodka. Beyond, the company will use the funding to create a commercial-scale facility to convert CO2 into alcohol that could be used for consumer products but also industrial use cases.

Just Eat Takeaway is considering a sale of Grubhub, which it had acquired for $7.3B just a year ago. It seems that things are not playing as planned and that the (overpriced) acquisition is one of the causes of investors’ dissatisfaction (Just Eat Takeaway shares plunged in the past year). The sale would enable the company to refocus on its core European markets, where it is more and more challenged.

Big move in big food: Lactalis may be planning to buy a part (or all) of Danone.