3 NOTABLE DEALS IN EUROPE, 2 IN THE REST OF THE WORLD

📦  🇬🇧  Gousto, the British meal kit unicorn, raised $150M to fuel its growth. With more than 60 recipes, the startup says it is the meal kit (ready-to-cook portioned ingredients and recipes delivered at your door) with the largest offering while being profitable (very few players managed growth and profitability in this space).

Will Gousto join HelloFresh (its main competitor, already public for years) for an IPO this year or in 2023?

🍽️  🇮🇪 Flipdish becomes Ireland’s first FoodTech unicorn. Flipdish already works with 7,000 restaurants by helping them to set up their own online food ordering platform (for takeaway or delivery operated by the restaurant itself or third parties). Flipdish says it acquires more and more customers that are leaving platforms such as Deliveroo.

🚚  🇪🇪  Bolt raised $709M for its free-floating scooters, ride-hailing service and its food delivery services. It delivers restaurant meals and has launched its 15 minutes quick-commerce grocery delivery option (with its own dark stores).
This deal shows both the growing strength of the Eastern Europe ecosystem and the growing appetite of Europe’s startups to go for markets outside of the continent, notably in Africa.

🐟  🇮🇩 eFishery, an Indonesian startup, raised $90M for its software products that help 30,000 shrimp and fish farmers to manage their operations.
The fish industry is still full of opportunities to make it more digital, and it may be one of the food/foodservice sectors with the most interesting B2B startups. 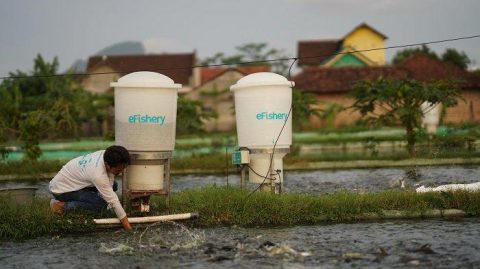 🏪  🇺🇸 Foxtrot, a US-based startup raised $100M for its convenience stores. Founded in 2014, the company is reinventing the corner store as both a “real world” physical place and a digital e-commerce platform. Its 16 stores are a way to drive traffic and operate 30-minutes quick-commerce deliveries (of selected brands, its own private label and meals cooked in the stores).
This model, which combines convenience stores thought as “experience-first”, digital, private label of cooked meals is highly interesting and may have the potential to create a strong brand loyalty (something quick-commerce and meal delivery companies have not succeeded at).

🇬🇧 UK’s healthcare system could save up to £30B a year if the whole population went vegan. While more and more people are making the link between meaty diets and climate change, another angle against animal proteins is their impact on health. A plant-based diet reduces the incidence of many health issues such as diabetes (type 2) and even improves men urological health. Compounded at the level of a nation, this translates into huge sums of money (and years of better health). Will this argument be used by governments to encourage or even incentivise companies and consumers to go plant-based?

🍔 📉 Beyond Meat shares lost 40% since last October. Beyond Meat has even become one of the most shorted stocks (individuals and hedge funds betting it will go down) as sales stagnate.
However, even after that plunge, the company is still traded at 10 times revenues (Tyson Foods’s valuation is… 72% of its revenues).

🖼️  A restaurant will be open only for NFT holders. Flyfish club will be a members-only restaurant. The difference with existing private restaurants is that the access will depend on the possession of an NFT (Non-Fungible Token). Holders will be able to lease them (against money?) on a monthly basis. These will be quite exclusive with a price tag of 2.5 Ether (or around $8,000).