Last Thursday I had the opportunity to lead a panel on last-mile delivery robotics (for food) in Barcelona in an event organised by Jungle, a community of entrepreneurs working around the challenges of robofacturing. The audience was really curious and keen to learn more on robots and last-mile delivery and had many questions. Most of them were around 2 areas that I found relevant to share with you:

The social impact and acceptance of robots

If delivery robots are available tomorrow and are economically sustainable for last-mile delivery, what will happen of the thousands of delivery workers that we currently see in our streets? The impact of all those (in the majority) young men could be quite bad if all of them become unemployed.

And, on another level, if robots arrive in the streets, how humans will interact with them? Will I be fined if I kick one (accidentally, it would never cross my mind to rage over objects)? Living in Paris, a city where humans have already a hard time living with scooters, I can only imagine the outcome of those poor robots. Let’s hope they will be able to swim.

Another interesting debate that animated our panel was on the respective roles of robots and drones. While one can imagine drones very useful to deliver bigger payloads between cities or to a remote location, they may be too insecure inside our cities. A couple of drones was enough to cause a huge mess in Heathrow, so what could happen with thousands of them?

Many infrastructure (and some smart regulation) remain to be invented and create an ecosystem where last-mile delivery could be realistically robotised.  This leads to the idea that it will certainly happen in more “future enthusiast” cities and countries than Europe’s. Even if our audience was made of tech enthusiasts, issues were brought first and opportunities second. 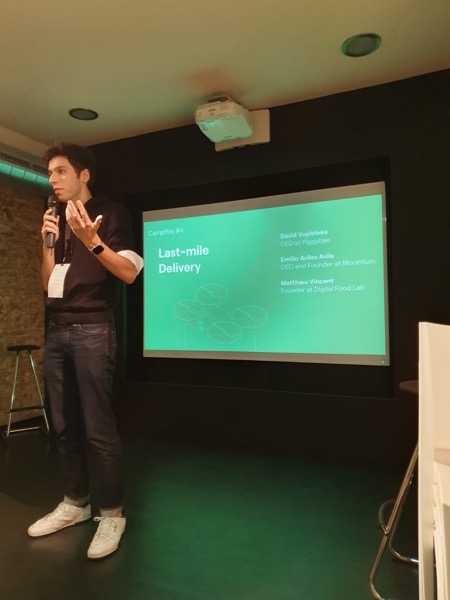 Finally, the conclusion is that as in many cases with innovation, we only think about the use cases of robots as a potential replacement of jobs that humans currently perform. I do think that robots, especially in delivery, will have many impacts on new business models, new experiments that we currently just can’t grasp. So, even if the issues are numerous, let’s be optimistic.