It has become ubiquitous (especially in France) to say that raising money is neither an indicator of success (which is true) nor that it can predict it. With the use of our database of deals (notably the older and smaller ones) on French FoodTech startups, we have looked for answers to this question. Our goal is not to solve the dilemma about the rightness of raising money but to give companies and investors clues on how to evaluate potential collaborations or targets.

Using data that we are 100% confident about (covering deals between 2014 and 2020), we looked for answers to three questions:

Do all the startups raise money, and does it help to survive?

As shown quite clearly in the graph below, a great majority of FoodTech startups (60%) never raise any money at all (we excluded all grants and debts for this study). And the startups that raise money often do so only once in their lifetime.

It is also quite remarkable how the number of financing rounds affects their perspective of ceasing activity (excluding IPO or acquisitions, which are considered successes). Startups that have not raised any private money close more than those having raised. It is not surprising as this category contains all the short-lived projects that will explode in their first months as either the team or the project reveals itself to be unmanageable. However, it is quite surprising to see how having raised more than once makes a startup’s chances of closing its doors much less likely than others.

So, we can say that raising money, ideally twice or more, diminishes the probability of ceasing activities for a startup. 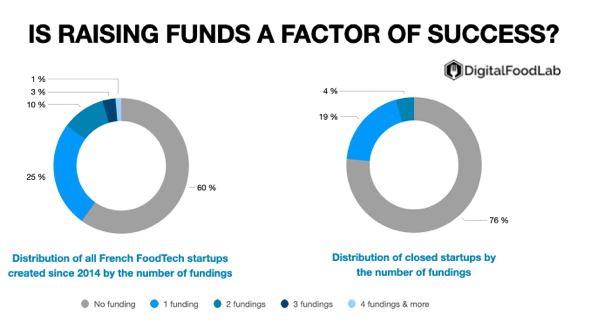 How much should you raise to improve your chances?

We have looked at all the startups created between 2014 and 2018 (included) to have startups that had 18 months or more of pasted activity (and so had the opportunity to raise money and less positively close their doors). We found that if raising more makes one startup less likely to close, it was not by a big order of magnitude. The only tipping point identified is around €100k. Raising less than that (through non-experts with crowdfunding or love money) doesn’t change the chances of failure.

The graph below should be read with a note of caution. A significant part of older “active” startups are what we call “zombie startups“, alive outside but dead inside. After a couple of years, when things stall, instead of admitting failure, founders move on but keep them alive as pet projects.

Raising money from experts (professionals or business angels) for as little as €100k is the threshold to increase a startup’s chances of survival.

For many more insights and the list of all active FoodTech startups (updated quarterly), ask for our exclusive premium report on the French Foodtech ecosystem!