Finally, it’s summertime! Before going to the beach, let’s look back on the first half of this year for the FoodTech ecosystem. In a word, let’s say that it was rockier than expected.

After a couple of years of expansion, ever-growing valuations and bigger deals (we went from a world where raising $1M was noteworthy to one where a $20M series A was small potatoes). Now, things are calming down fast. Deals and valuations are much more reasonable (when they happen). We observe the start of what we expect to be a succession of startups announcing layoffs and departure from “non-strategic markets” (i.e. geographies or ventures where the ability to make a profit was at best shaky).

Looking at the 15 top deals announced in the first half of 2022 in Europe (graph below), we can see that massive deals still went ahead, even if they are far less massive than last year. Beyond, three elements are striking:

1 – the diversity of the categories of the startups that raised the most: we went from a situation where it was quick-commerce only to a focus on the four major FoodTech categories (see here for the definitions).

2 – the diversity of countries: again, if we can see the leaders (UK, Germany, Nordics? the Netherlands), many other areas are represented

3 – a bitter note with Starship Technologies, which is now considered US-headquartered (hence, we’ll remove the startup from further rankings and Europe-related reports). We observe a small but growing flow of startups quitting Europe to expand in the US to find a bigger (and more receptive) market which still getting funded in Europe. 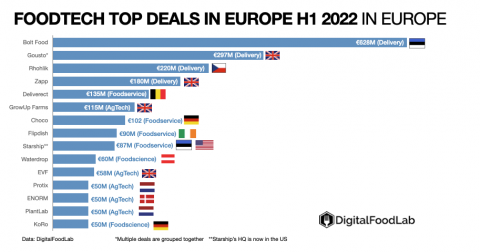 And now, what’s next?

I remain strongly optimistic. The recent growth of the FoodTech ecosystem was led mainly by investments into startups working on the long-term and massive trends that are here to stay, such as automation, alternative proteins, sustainable farming and online groceries. However, there is a downturn, and we will still be in it for the next 12 months, and things may get worse before they get better.

If raising funds is getting harder, notably from VCs, I do think that there is still no better time than right now for entrepreneurs to launch a new FoodTech venture. Similarly, for food corporations, it is the best timing to plan for the future by investigating, supporting and investing (at a discount) in the ecosystem!