Ah, robots… We’ve been talking (or was it daydreaming?) about them for years, and until now, most of the things we’ve seen have been sketchy experiments. But 2020 and specifically COVID have accelerated things. It seems that, more than anything, the past year has removed both legal and mental barriers to the use of robots. We’ve seen investments and partnership announcements in the whole food value chain over the past couple of months. Let’s take a look at the most exciting startups and experiments on the horizon.

Cooking robots have always occupied a large part of my imagination. However, I have seen very few of them outside of FoodTech events. Indeed, if some companies such as Moley can fully robotize a kitchen, it is only by building a completely (and expensive) new one. There is no alternative to retrofit my city-dweller kitchen.

Instead, many startups have ventured into cooking robots dedicated to QSR. We can divide them into three broad categories:

Last-mile deliveries are still the bottleneck of most restaurant and grocery delivery operations. It is expensive, even in densely populated locations. Startups and larger companies have been experimenting in this space for years, notably in closed-door environments such as universities.

In 2020, the lockdowns have been frustrating as most campuses shut their doors. However, many local governments started to open the gates for “in-the-street” experiments. 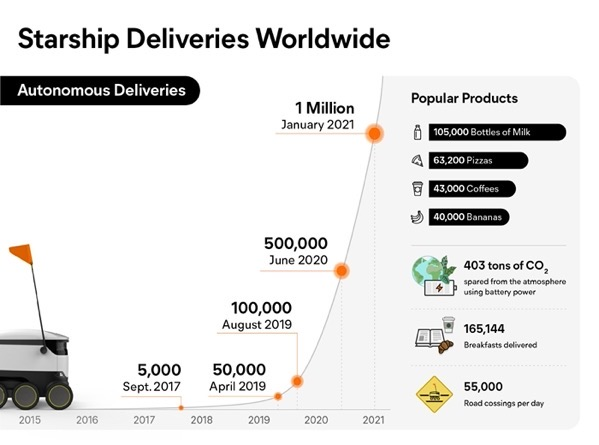 A few weeks ago, I was part of a panel about food supply chain resilience during the pandemic. I learned that many specialists have feared one thing above all: that border closures would make harvests impossible in the absence of migrant workers. This has suddenly made startups developing robots that replace human workers in the fields much more attractive. Drones are already massively used for imaging while weeding robots such as Naïo are making their debuts. In the long term, most of the attention is on developing robots able to pick fruits and vegetables in the field without smashing them.

As mentioned in this recent FT article, there is a form of disillusion there too. In most cases, robots are not that useful, and they don’t seem to alleviate the most demanding work. They only make it more painful for the workers.

However, the success of Ocado’s automated warehouses seems to point toward a brighter future. It is multiplying its partnerships with retailers such as Kroger in the US. Other retailers, such as Walmart, are developing their own in-house solutions. Full automation seems to be an obvious choice in some instances (large locations, which will be used for a single purpose, such as groceries). It is harder to imagine how to automate old buildings or new places such as dark stores in cramped city centers. Hence, warehouse robotics remains a very promising domain that more entrepreneurs should explore. 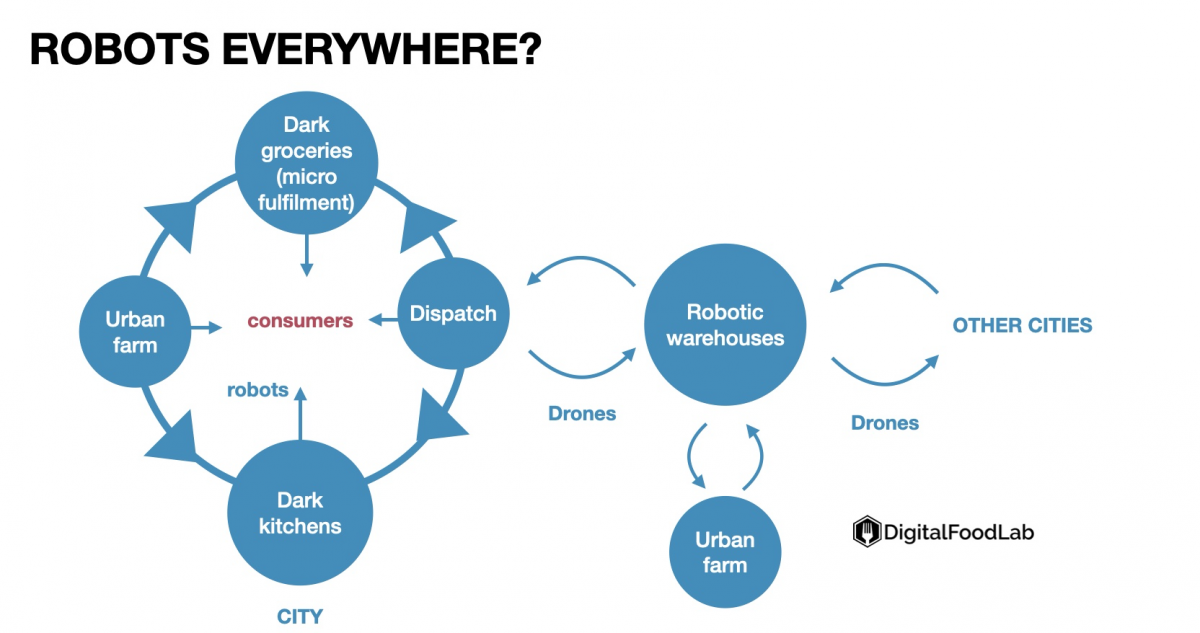 What would it look like if all these types of robots were working together? As shown in the graph above, we can imagine a somewhat fully automatized food system where:

While all of this seems plausible in theory, I remember that my iPhone has a hard time talking to my Airpods over decades-old Bluetooth. And they are from the same company. Hence, there are huge challenges when it comes to making all these robotics technologies (from different companies all over the world) work together seamlessly. So, we can’t seriously expect this scenario to work for the foreseeable future (but we can dream of it). The future will probably be messier, with lots of robots and humans in the middle.