While social distancing is the new normal and most coffee shops are closed or reduced to takeaway orders, what could be worse for the fastest growing chain of coffee in the world? Apparently, Luckin’ Coffee has found the answer: a $300M allegation of fraud.

Luckin’s history was until now quite astonishing. The company was only founded in October 2017 and has now more than 4,600 stores across China, overtaking Starbucks as N°1 (Starbucks has “only” 4,100 stores there). In 2019, its IPO was a huge success, enabling the company to raise half a billion dollars to boost its growth. The startup and its staggering growth are often considered as the example of how fast an omnichannel brand can grow (coffee is often pre-ordered, pre-paid and delivered in China).

However, due to this potential scandal, the drop in public valuation is huge. More than $13 billion have just vanished into thin air in less than a week. The company is now merely evaluated above $1billion.

While the company is in dark conditions, customers are rushing to the stores. Some see it as a proof of Chinese nationalism, other, maybe more realistically, just see consumers afraid of loosing pre-paid coffees (which were massively encouraged and discounted as a way to boost sales).

It is yet hard to have a good sense of what’s happening with Luckin coffee right now. Is it only an unfortunate step in the story of the fastest growing brand yet? Or is it the end of the story of an unprofitable business that has concealed its inability to generate profit behind fake stunning growth figures? 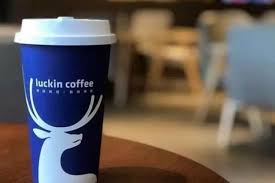