Spain is Europe’s fourth agrifood power and tenth worldwide thanks to the quality of its products and raw materials. Undoubtedly, the agrifood sector is strategic for Spain, contributing 10% of its national GDP and generating more than 2.8 million jobs.

When you consider Spain and FoodTech altogether, and if you are already well-versed in FoodTech, you’ll probably think mostly about international brands like Glovo and Heura. However,  2021 has undoubtedly been a year of inflexion for the country, tripling its investment in Foodtech over the previous year, and positioning Spain as the 5th in terms of investment, after Germany, the United Kingdom, France, and the Netherlands.

This inflection is why the first Spanish FoodTech Top 20 startups list is released. As a result of the work, DigitalFoodLab, consultants working with leading global companies on their strategy for the future of food with Eatable Adventures, one of the main three global Foodtech accelerators.

As you can see below, investments in Spain have been indeed dominated by Glovo’s funding. But, if we exclude this startup (which is now part of Delivery Hero’s galaxy of acquisitions), we see that investments have increased steadily over the years. 2022 should be an exceptional year, where just in the first semester achieved almost the same amount of investment as in the entire year of 2021. 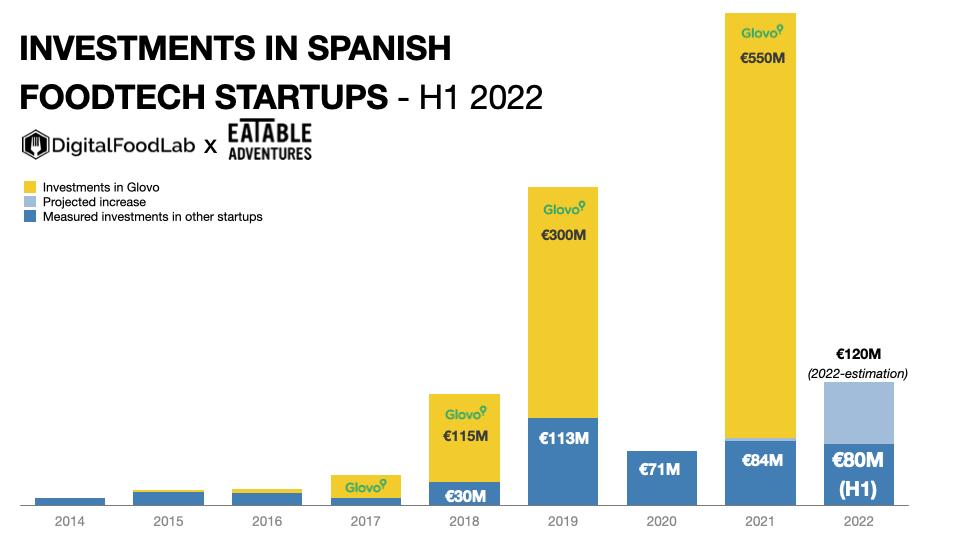 Compared to other European FoodTech ecosystems, Spain’s is still a bit small in size (notably if we remove Glovo). However, it is bigger than many others, such as Italy’s or Eastern Europe’s. 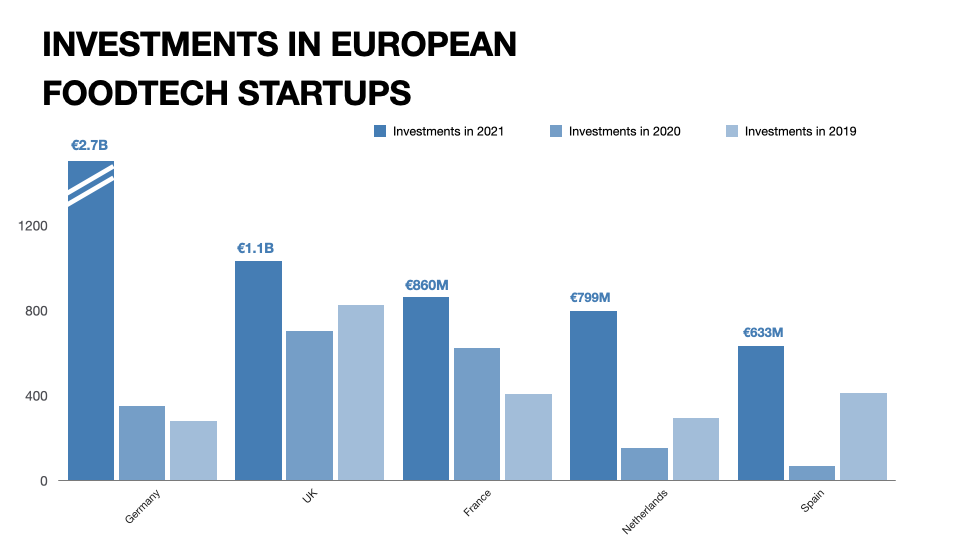 Together, the teams of DigitalFoodLab and Eatable Adventures selected the top startups using the following method:

In a word (and that is something very important for us), this “top 20” is subjective. It shows what we think is the best snapshot of the ecosystem and its highest potential companies.

Below is the mapping, by category, of our Spain FoodTech Top 20. For category definitions, see our FoodTech definition here. 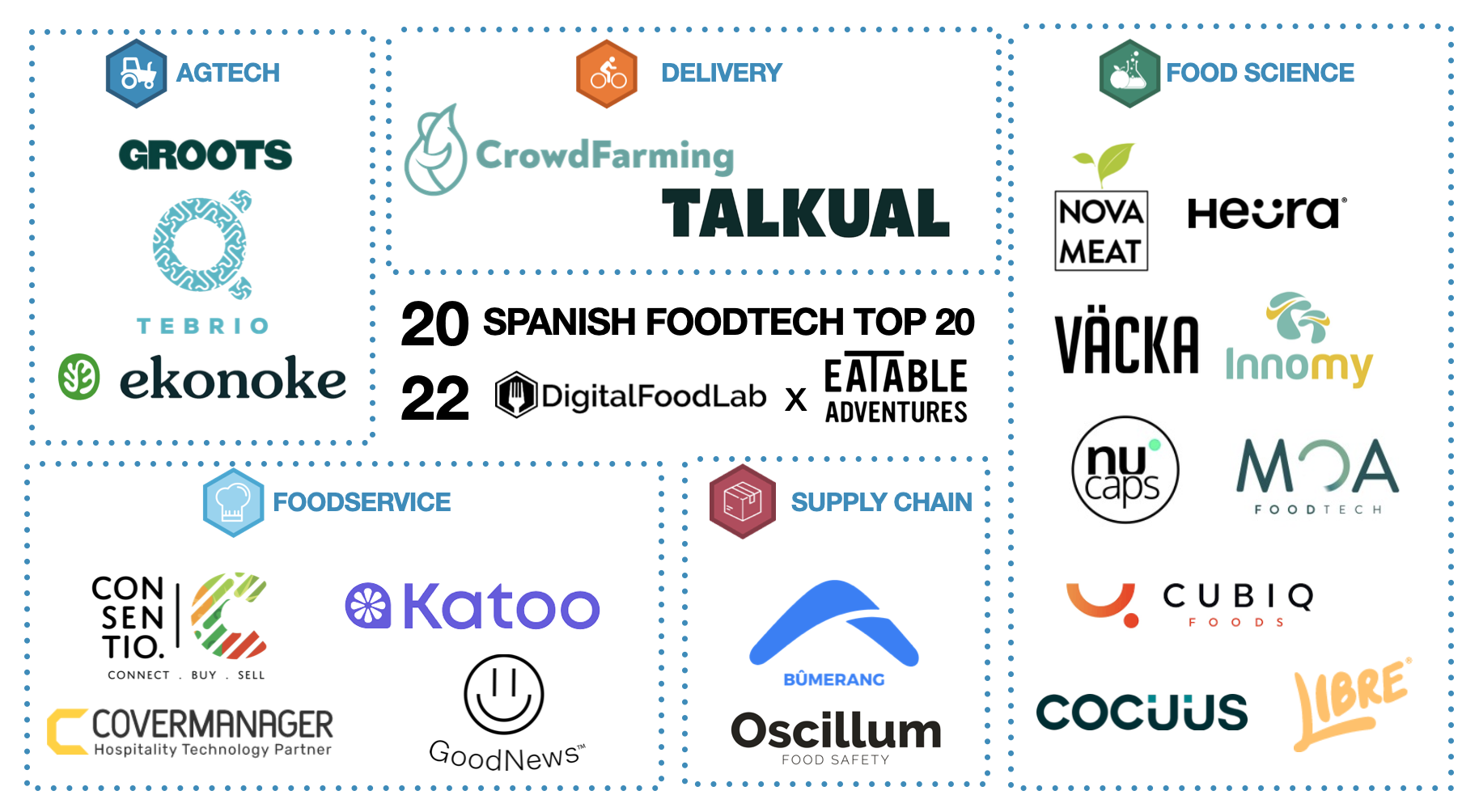 The Spanish ecosystem has a huge potential. Indeed, it has already generated one unicorn (Glovo), which is already a feat. The recent acquisition of the company means a pool of talent and money can be re-employed in the local ecosystem to make it grow faster.

Beyond Glovo, the ecosystem, as this mapping shows, is already strong in food science, notably around alternative proteins:

An interesting fact is that, according to Proveg’s ranking of the five European countries betting the most for cultured meat, Spain takes the third position. Cellular agriculture is an area of great interest for the Spanish ecosystem having successful cases worldwide like Biotech Foods, Cocuus, and Cubiq Foods.

For Matthieu Vincent, co-founder & partner at DigitalFoodLab, “as FoodTech is here to help us globally move toward a new food system, which we call the ‘future of food’, it is important that innovating companies are as close as possible to the areas which are already cultural and industrial food hubs. In that sense, the growth of the FoodTech ecosystem is great news and can only fasten our transition to a better, fairer, healthier and more sustainable food system”.

“In these first months, we have observed exponential growth in investments in our Foodtech ecosystem, a trend that we saw already in 2021, but that without a doubt has been consolidated with the first rounds of investment in 2022. Spain has promoted leading projects in strategic foodtech areas such as precision fermentation, 3D printing of alternative proteins, or precision agriculture”, said Itziar Ortega, Senior Vice President of Global Operations at Eatable adventures.