Where is this alternative protein market coming from and where is it going?

(This note is a summary of a presentation given in Amsterdam at the Kind.Earth.Tech conference)

Many people are now talking about a future where if not irrelevant, cattle, sheep and poultry use for human consumption would be reduced to a bare minimum. Two approaches confront each other: 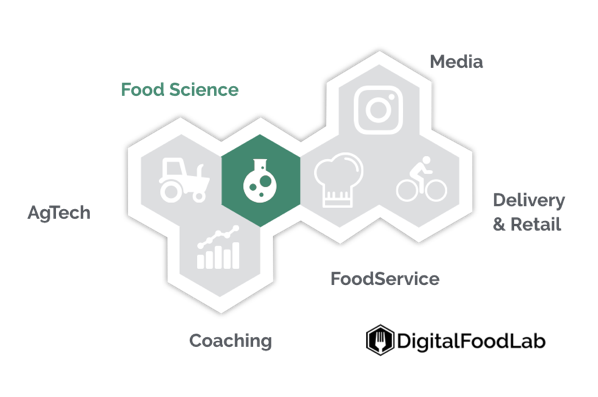 The world is not beef – startups are working on many substitutes

As shown below, the alternative protein ecosystem is crowed with many startups trying to replicate a vast range of products. 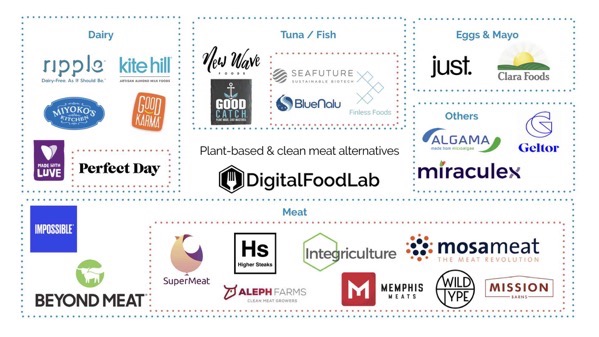 If meat and especially receiving most of the attention now, due to Beyond Meat’s IPO (with its stock rising like a rocket), let’s not forget that the first company that received a lot of coverage is Just and its just mayo products. The areas that receive most attention are:

Investments have been multiplied by 4 from very low levels in 2014 ($150m globally invested in alternative proteins) to a more significant $600m in 2018. As shown in the graph above, clean meat investments were almost inexistant before 2016 and have started to be noticeable in the last two years. They still account for a tiny share of the global alternative protein investments.

If investments have grown significantly in this specific domain, they are still dwarfed by the global investments in FoodTech. Indeed in 2017, alt proteins investments accounted for only 2% of FoodTech, this share has grown to 4% in 2018. 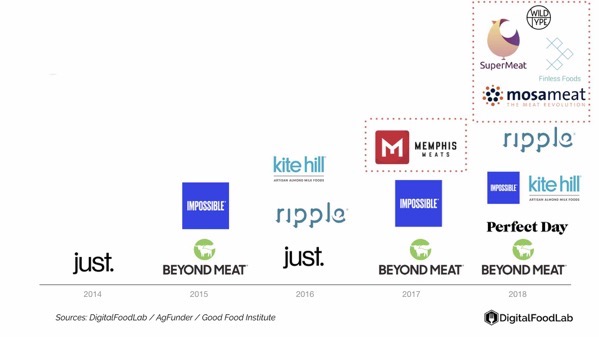 Even if partial, the graph with the most noticeable deals gives us a clear picture of something typical in Food(tech): the slow then fast movement. In the last 5 years, we have seen a slowly increasing number of significant deals and then suddenly in 2018 it looked like that any projects tagged with alternative proteins on its pitch deck were able to raise money.

We can have two conclusions with the above data:

First, this slow and then growing movement is quite typical in FoodTech. It generally indicates a tipping point. Alternative proteins startups have just entered a new level and are now considered as serious investments (therefore, investors are betting that there is room for some to become multi-billion dollar businesses, just as Beyond Meat). So, we can expect many significant deals in the incoming months and years.

Then, if we follow data blindly, the European FoodTech ecosystem has known its tipping point in 2016, two years after the global (which means the US, at that time) ecosystem. Applying a quick translation would mean that 2020 would be the “hot” year for alternative proteins startups to raise money in Europe.

One of the best things in FoodTech is that even if understanding the underlying technology of some products can be tricky, testing and liking it is pretty easy. So we have put below, some of the most speaker of startups in plant-based and cell-based world with their website link to let you try some of the available products.

Lumen raises $8.5m to tell you what you should eat based on your breath
Dairy (cheese) alternatives on the rise