🚚  🇨🇿  Rohlik, a Czech startup, raised €220M for its online grocery delivery supermarket. It is already active in four markets and looks to expand in three new countries (Spain, Romania and Italy). Money will be used to finance the automation of its operations.
While the attention is very much put on quick-delivery startups, more traditional grocery delivery ventures such as Rohlik, Picnic (in the Netherlands) and Oda (Norway) have each raised between €300 to €1B. The three are also moving toward more automation and… Germany, which the three mention as one of their next markets to enter. As for quick-commerce (Europe’s biggest players are born in Berlin and have the biggest market shares there), it seems that Germany is the place to look at for the future of groceries.

💳  🇬🇧 Peckwater, a UK-based startup, raised £15M for its platform that helps restaurant and kitchen owners to become franchisees to its set of virtual brands. It uses technology to determine the ideal menu and improve performance in the kitchen operations. Is this kind of autopilot tool the future of the restaurant industry?

🍅  🇮🇳  WayCool, an Indian startup, raised $25M (as a part of a larger equity + debt $40M round)? The startup’s goal is to remove intermediaries and to connect quality farm-sourced products to various channels (notably retailers and restaurants).

🌿  🇺🇸  🇸🇪  Symbrosia, a US-based startup, raised $7M to reduce cows’ methane emissions by feeding them with seaweed (as an additive) with the participation of Danone’s corporate VC. It will use the funding to build a facility to increase its seaweed production. Interestingly, the same week, Volta Greentech, a Swedish competitor announced that it was launching its low methane beef in supermarkets (with cows partially fed with seaweed). Following a study made by the startup, seaweed could help reduce methane by above 90%.

🐟  🇺🇸 Current Foods, a US-based startup, raised $18M for its plant-based alternatives to tuna and salmon. Beyond this deal, not a week goes by without a new deal or product launch in seafood alternatives. If nuggets and milk were the products to substitute in 2021, it seems that seafood is the plant-based buzzword of 2022. Unfortunately, most of what we tasted was… underwhelming (to put it nicely). 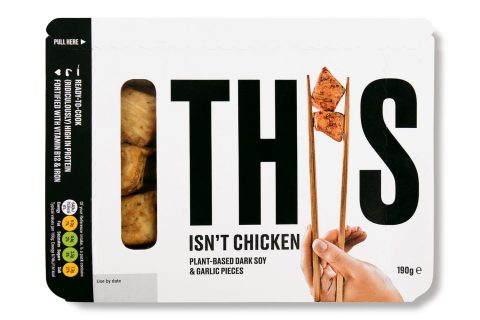 🥓 🇬🇧  This, the UK plant-based brand raised £4M in a new crowdfunding campaign (and in less than 2 hours). This has certainly succeeded in one of the most difficult tasks for a food brand: creating a community of fans, something where most food startups and even larger CPG brands fail.