We just released the fifth edition of our report on the state of the European FoodTech ecosystem. This report has been made possible, and we can share it with you due to the support of our two sponsors, Nestlé and Pinduoduo. You can access and download the report here.

So, what has happened since last year?
First, we can say that 2021 has been an extraordinary year for European FoodTech. After a year of stagnation, FoodTech is booming in Europe, in all of its categories (from the future of agriculture to future food products to delivery) and also in most regions. Investments reached €9.5B in European FoodTech startups in 2021. 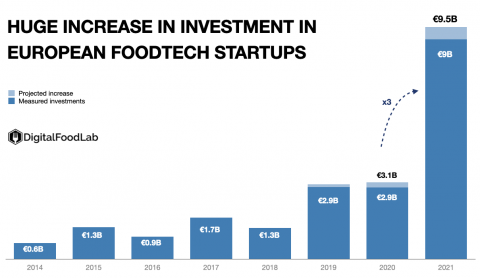 That is a threefold increase in just a year, something we have never observed, even when the amounts invested were much less important.

Even more significant is the fact that Europe’s share of the global FoodTech ecosystem is increasing to 20% (from 12% in 2021), a point it had never reached before. More deals are made (80% more €1M+ deals), and each is becoming bigger: the median investment has doubled to €1.8M.

Where did all this money go? 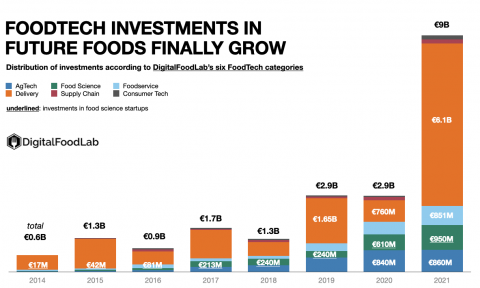 Investments in grocery delivery startups are the main contributor to this impressive growth. While a large share of that money went to quick-commerce startups, many other types of startups have raised funding to disrupt the way we think about groceries.

The speed at which this ecosystem is developing is unprecedented and its impact will be far from marginal. It could change the food retail landscape much sooner than initially anticipated (and beyond e-commerce).

Investments are increasing all over Europe. However, as the ecosystem matures, the amounts invested in the most developed hubs increase much more than in emerging spots. This means that the concentration of large deals is even bigger than in previous years. In 2021, more than 50% of the money went to startups located in the « European FoodTech Hub » region which includes Germany, the UK, France, the Netherlands and the Nordics.

We observed huge deals last years, but what’s next?

There are now 13 FoodTech unicorns in Europe, twice as many as last year. This increase reflects inflation in the size of the deals and the valuations of startups. 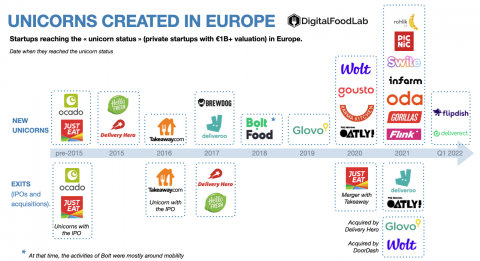 Beyond, we can easily identify 10 to 20 companies that have the potential to become unicorns in the next 12 to 24 months (the third wave of European FoodTech startups mentioned in last year’s report). Moreover, we can spot interesting early-stage (and well-funded) European startups in almost all key FoodTech trends. All the pieces are now in place for the development of a successful ecosystem.

Finally, further proof of attractiveness: 2021 was a record year in terms of the number of acquisitions and investments in European FoodTech startups, notably from American companies.

In a word, if everything is not perfect, the European ecosystem is showing many signs of strengths and both investors and global companies are watching it more closely than ever.

Again, I invite you to download, read and share your thoughts on the report. If you want a bigger picture and more elements of context, we can plan a dedicated workshop to present you and your team (we do presentations in front of large teams and also small gatherings of executives) the state of the (global) FoodTech ecosystem, the most relevant trends for you and how it may impact your business. For that, contact us here!