Partnering with influencers (which often means paying people that will never use your product to tell the world how amazing it is) has been one of the most effective acquisition tools for new food brands for the past years. Beyond paid influence, we observe a surge in the number of celebrities leveraging their influence to create brands. Here are four interesting recent examples:

1 – This week, GoPuff, the US quick-commerce leader (delivery in less than 30 minutes of a short assortment of groceries) launched a new brand of plant-based snacks in collaboration with a NBA player. This deal is really interesting as it is a private label brand so it will be only available for GoPuff users. As for virtual restaurants exclusively active on certain delivery platforms, it may drive traffic toward GoPuff. 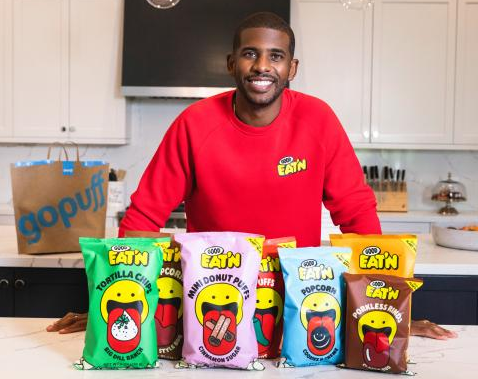 2 – Kourtney Kardashian is about to launch its own brand of gummy supplements. This space of “celeb-supplements” is quite crowded and often synonymous with poor quality.

3 – In August, Venus Williams launched a new brand of meal replacement, Happy Viking. Normally, when a new food D2C brand raises what is now considered a small amount ($2M), especially in a highly competitive and hence not-so-innovative category (meal replacement), no one really mentions it. However, this deal got a lot of attention, and I have seen the brand mentioned as an inspiration in at least three workshops with entrepreneurs and agencies. It seems that the success of the co-founder act as a predictor of the success of the brand.

4 – MrBeast, an American YouTuber known for videos such as “I give you $1M, you have only one minute to spend it”, launched in 2020 a virtual restaurant brand MrBeast Burger. It is now available in hundreds of locations, and it launched this week its first “real” restaurant. There was a huge crowd waiting just to try the burgers and get closer to their favourite celebrity.

Many virtual restaurants have tried to replicate this success. They mostly failed, sometimes miserably. Either their celebrity had not enough of a community or (mostly) it was too visible that they were just there to collect a check. This also applies to food products, as shown by the not-so-subtle partnership between Kim Kardashian (again) and Beyond Meat. This study confirms that a private label partnership between a retailer and a celebrity needs some depth (in the number of products or in the involvement of the celebrity) to be perceived as credible by consumers. In the future, we can expect more and more players, YouTubers and other influencers to use their fame in food. However, as we have seen, to make a difference, there is now a need to go beyond a mere endorsement visible on PR and on the packaging.