What a slow start to the year. Last year, it was almost impossible to pause for a minute. Multiple deals of tens, if not hundreds of millions, were announced each week. Now, things feel really calm, and a big part of the news is now about startups laying off employees. Usually, the fourth quarter is very active. Let’s say it was not the same last year.

As often mentioned in this newsletter, we can’t summarize an ecosystem of thousands of startups to 10 super deals. However, it creates a really good snapshot of the situation as it indicates where the money is going, both in terms of geographies and categories/trends. 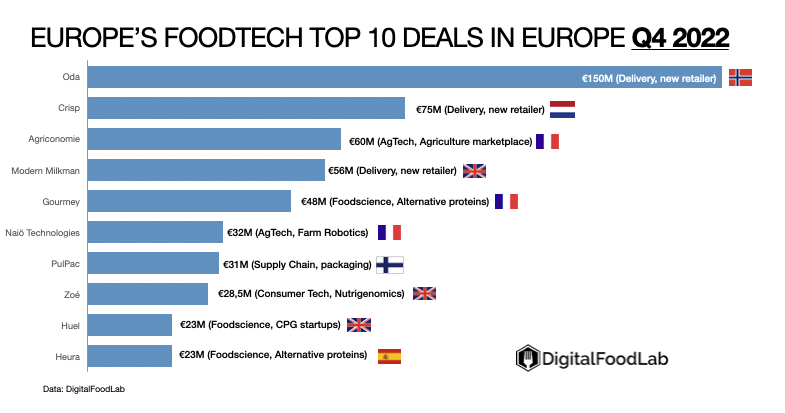 Looking at the top 10 deals in the last quarter of 2022 in Europe and comparing it with the first half of the year and even the third quarter, we can confirm that deals are much less limited in size. We can first observe that we are not in a “crisis”. Deals are made, even big ones with tens of millions. Also, grocery delivery startups, even if controversial on their ability to generate profits, are attracting investors. Quick-commerce startups are not raising anymore. Here are completely different startups with much more interesting and diverse business models. Basically, when I look at this graph, I really feel optimistic about the state of the European FoodTech ecosystem.

We also created the top 10 list for the whole of 2022. First, the most visible point is that 8 of 10 deals were made in the first half of this year. I should add that Oda, which raised €150M at the end of 2022, did it at a lower valuation than its previous round. 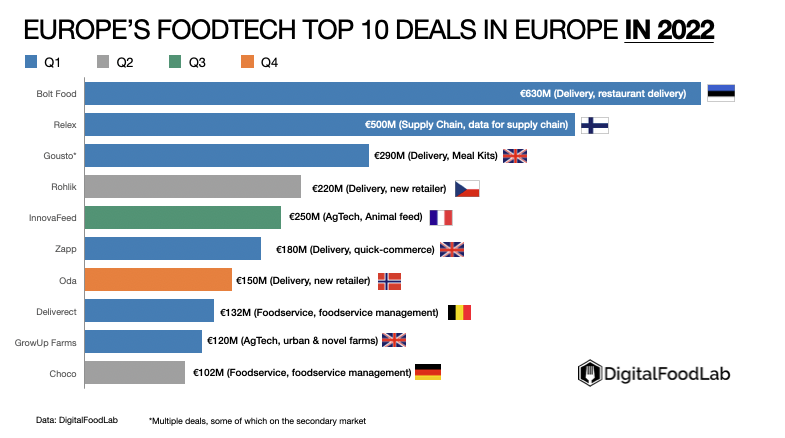 We observe that delivery, notably grocery delivery, was still the key category of the European FoodTech ecosystem in 2022. As it lost most of its shine during the year, we have to imagine 2023 with smaller deals and a focus put on agriculture (notably inputs, even if we believe that the trend around them will decrease), food products (both brands and alternative proteins) and software solutions.

In a word, we could say that €20M is already the new €50M. It means that startups planning to raise €50M or more in 2023 must adapt to be able to raise only €20M. And that is the best-case scenario, which will probably take 6 or 12 more months than anticipated. Said like that, it doesn’t seem much, but it implies that these companies have to adjust the speed at which they are spending what remains in their bank account. Hence, the layoffs, pivots, market withdrawals or refocus already announced.

Again, this year will be fascinating. The current situation helps to sort the most agile, resilient and relevant startups and will give birth to whole new ecosystems. We are still working on our predictions and trends for 2023. If you have some ideas, share them with us!