Last week, we released our [report on the state of the European FoodTech ecosystem (which you can download for free here!). Investments grew from €2.9B to €9.5B, the most impressive rise ever in the ecosystem (which enabled Europe’s share to grow from 12% to more than 21% of the global FoodTech investments).

All but one FoodTech category saw an impressive rise in the amounts invested: AgTech. This is quite surprising. Indeed, the reasons behind the rise of the investments in FoodTech should have supported this ecosystem too:

But, investments stalled in AgTech, when they grew quite significantly globally (with giant deals in leading startups such as Inari or Bowery). However, at DigitalFoodLab, we don’t feel particularly worried about the state of the European AgTech ecosystem, quite the contrary. 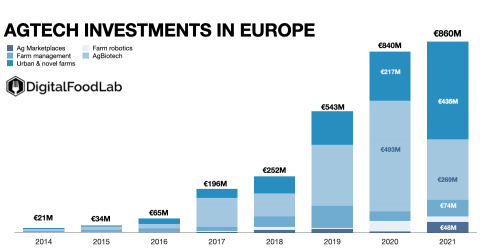 When you look at the investments on the chart, you can clearly see that AgTech investments in Europe were mostly fueled by the AgBiotech category, and more specifically by one sub-category: insects (see our recent note on the subject). In 2021, €400M (that’s 50%) of the amounts raised by European AgTech startups went to three startups working on insects for animal feed. But after a couple of prosperous years, these startups have attracted much less cash in 2021. The structure of the ecosystem is changing quite dramatically: 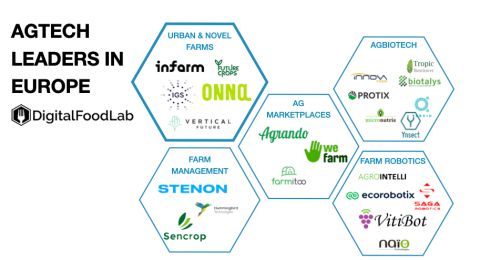 Beyond this optimism, compared to other regions (notably North America and Israël), Europe’s AgTech remains weak in 2 categories:

In a word, Europe has AgTech leaders around insects but also in urban farming and many other subcategories. Beyond leaders, we are also highly optimistic about the aforementioned “deficiencies” of this ecosystem. We have observed the emergence of a large number of new ventures, bio-solutions, marketplaces, farm management, and robotics, which have the potential to become leaders.

The shift in many European country policies toward a “strategic autonomy” rather than a race on quality and high-end food products may accelerate this trend.