In this series of summer articles dedicated to graphs and reports (most of them accumulated during the year and which I am only reading now), I wanted to make focus on how agricultural land is used, how it is impacting us now in a time of crisis and how this could evolve with new technologies.

First, as you certainly know, the war in Ukraine has already devastating consequences in terms of inflation and access to grains in some parts of the world. 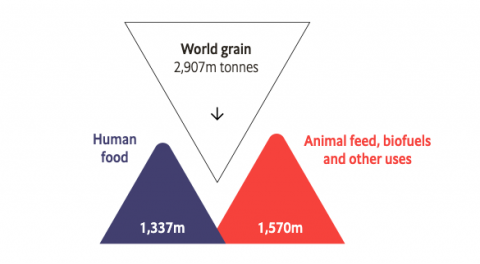 In this graph (and the related article), The Economist’s data team show that less than half of the grain that is produced today goes to actual human food. The larger share goes to animal feed and biofuel. Pigs consume today as much grain as 2 billion people.

Beyond, a recent article (a great read if, like me, you are a fan of data visualisation) shows how space is used in the United States and, notably, how much land is actually dedicated to agriculture and to “the food eaten by Americans” (opposed to pasture land, crops dedicated to exports, feedstock feed and biofuel).

Let’s move away from the current state of things. Can we imagine a world with a growing share of our proteins coming from alternatives (plants, cellular agriculture, fermentation, etc.)? It would mean that:

Even if this happens slowly and incrementally, it would have a massive impact on land value and the landscapes we are used to. I think this should be a discussion that could be given more weight and consideration when talking about future foods. The economic and environmental impacts could be huge (without other areas that could be affected).

In the case of the continental United States, that would be something like 41% of all the land that would just become empty. For the UK, this would be much more (you can have a look at this very interesting report on the UK’s food strategy, notably p90 for a chart on how land is used).

In this context, the growing number of startups venturing into carbon counting and notably schemes to financially reward farmers to care for agricultural lands that become carbon sinks makes even more sense.