While it is essential to keep in mind that consumers who switch from animal products to alternatives do it for health reasons, it seems that is changing. The environment is a growing concern in consumers’ choices (as is animal wellbeing). However, consumers are not all educated about the potential benefits of alternatives and the impact of animal proteins on the environment. Many have tasked themselves with this. In the past month alone, we have observed at least two approaches (which are not mutually exclusive):

1- explaining how big food is bad

Agriculture is responsible for 34% of the world global greenhouse gas emissions, and animal-based food is the most significant component, with 19.4% of all the emissions (beef represents 8.5%). Put it otherwise, beef farming and consumption alone emits three times more than an industrialised country such as Japan.

Though compelling, this data seems not to be enough to convey the message to consumers. Hence, the new idea is to make things more relatable and associate big food companies with something that most hate: oil and finance. It can be observed in the latest Meat Atlas report (see for the picture below). More than talking with abstract figures, it points out several meat and dairy companies and shows that, combined, the top 5 meat and milk companies emit more than the biggest oil producers. 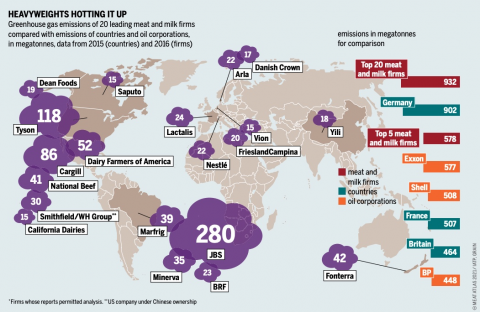 Plant-based analogues developed by startups (and food giants) are more and more criticised for their long list of ingredients (and hence are less seen as healthy). But, they are better for the environment (even if you follow the data, chocolate and coffee may be worse than many animal products). We can expect these shaming practices to increase, notably if they prove effective at making big players launch new products and adopt new practices.

Telling others what to eat or showing off a perfectly balanced diet on Instagram is not enough for influencers and climate-concerned movie stars. Indeed, it seems that investing in the future of food is the new hottest thing in Hollywood. In the past couple of weeks, the trend appears to have been around cellular agriculture (or should we say cultivated meat?) startups :

It is still hard to see if these startups do well (in terms of financing, at least for most of them, as they don’t have a product yet) due to people they have as investors or if they are good at promoting themselves and attract famous people. However, it is undoubtedly the case that these notable investors can use their clout to make brands popular (see how George Clooney’s tequila brand became acquired for $1B).

Next: pushing forward and asking for government intervention?

All this gives us a hint about what the future may look like with alternative protein companies (and well-financed lobbies behind them) insisting on how their products are better for the environment and the animals. We can wonder how all of this will evolve with potentially:

In a word, change is ahead. We can’t really predict its speed. The only thing I would bet on would be the fact that it will not be linear but rather bumpy and then exponential. But, we know one thing, it will not be smooth. Players in the food industry should seriously start to understand where they are going, plan and act.

alternative proteinseditoenvironment
Edito: tasting good is the first requirement for the food of the future
Best deals and reads of the week