Things are more complicated for startups than they were in 2022. It has now been well-documented that deals are down in number and value (the cash raised by startups). How does this translate to FoodTech startups in Europe? We have compiled the first data that we have on investments in startups in the first half of the year. For the full report and state of the ecosystem, go to our (free) report on the state of the European FoodTech ecosystem.

Let’s start with the data itself. It depends on how you want to see it, but you can see the glass:

The same logic applies to the number of deals. If we take investments bigger than €1M (those with the highest chances of being reported fast by the media), they are down 33% in one year but 10% up compared to 2020. 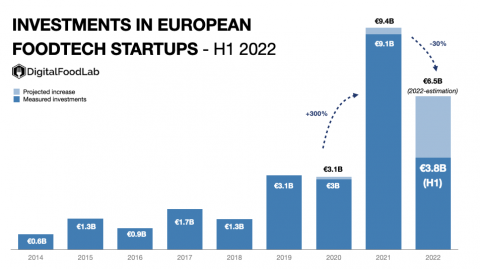 Then, let’s move to where this money went if we compare H1 2021 and H1 2022 regarding the FoodTech categories. 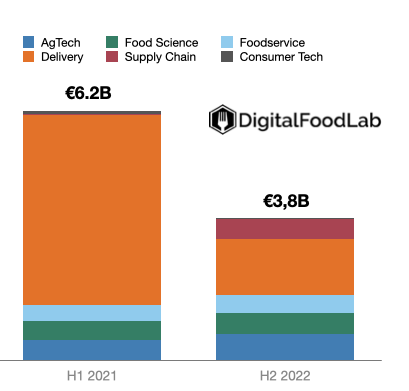 In terms of amounts invested, it is mostly delivery starts that raised less (and more precisely grocery delivery and quick-commerce startups). Startups in other categories, such as food science (notably alternative proteins) and AgTech, raised more money in H1 2022 than last year!

If we look at the number of deals, it is only the third of H1 2021 for delivery startups.

So what does all this data tell us about the state of the FoodTech?

1 – things are more complicated, but it’s not (yet) a crash: we have fewer deals and less money invested. Small checks keep being written to early-stage ventures, and startups are sprouting everywhere. Similarly, mature startups with either (accurate) technology or a profitable business model are still raising huge amounts of money. The ecosystem’s future is not compromised here compared to previous hard times.

2 – we will have to wait until at least the end of the year to see where all of this lands and if we have reached a bottom or are still to go lower.

3 – it looks like it is more a “complication” related to the over-inflation of the valuations and investments in some shaky business models and startups.

Things are bad, but not too bad, and they should get better soon. Investors have massive amounts to invest (they have raised a lot in the last couple of years), and all this money will have to go somewhere. Again, if you are an entrepreneur, there has never been a better time than now to launch your FoodTech startups. If you work in an agrifood company, similarly, it is more than time to develop an innovation strategy that takes into account that the future of food will be very different from what we currently know. If you are in one of these situations, contact us!