We just released the sixth edition of our yearly report on the state of the French FoodTech ecosystem. The report is accessible freely here. We are French, and we have been waiting for years to be able to say it, and finally, we can: Foodtech is booming in France! As we release this report, InnovaFeed (insects as animal feed) just raised €250M; this is the biggest round ever for a French FoodTech startup and also the biggest in Europe’s AgTech.

In 2021, French FoodTech startups raised €875M, 40% more than in 2020, which was already an extraordinary year. In the first half of 2022, despite strong headwinds and a global decrease in tech investments, investments are well-oriented. 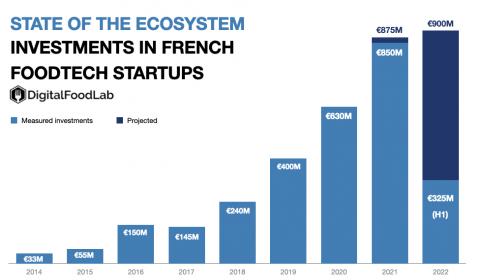 On the bright side, we observe that year after year, the last « historic » challenges of the French FoodTech ecosystem are now solving themselves:

However, the French FoodTech ecosystem still has many weaknesses, among which:

If we balance the positive and the negative, we see that 2021 was pivotal. Things are changing fast, with many high-potential new ventures getting (well) funded. We remain convinced that if one continent should lead the FoodTech revolution, it should be Europe. And in this continent, who could be better suited than France and Paris to be its beacon?